Jordon Smith has had a tumultuous few seasons in Supercross with injuries and setbacks. Now after 4 months of preparation the newly signed Honda rider feels as strong as ever.

“It’s been a hard few year’s with injuries and setbacks but I am feeling strong, pre-season at MTF has gone well and the new team is prepared and motivated. I was happy with qualifying, and my heat race and I know what we need to work on ahead of round 2 this coming weekend in Arlington,” said Smith

Smith qualified three tenths of the leader and led every lap until the final lap of his heat race. He took second in his heat and ran consistent times.

“The heat race was all about hitting my marks, I still need to work on my starts and some race craft as its been a long time between races for me, but it was second was a solid result,” continued Smith.

In the main event Smith gated last into turn one and worked his way past half of the field in less than 5 minutes, an unfortunate crash into one of the track markers dismounted Jordon and set him back. He fell again later in the race and was able to get back up to 13th. 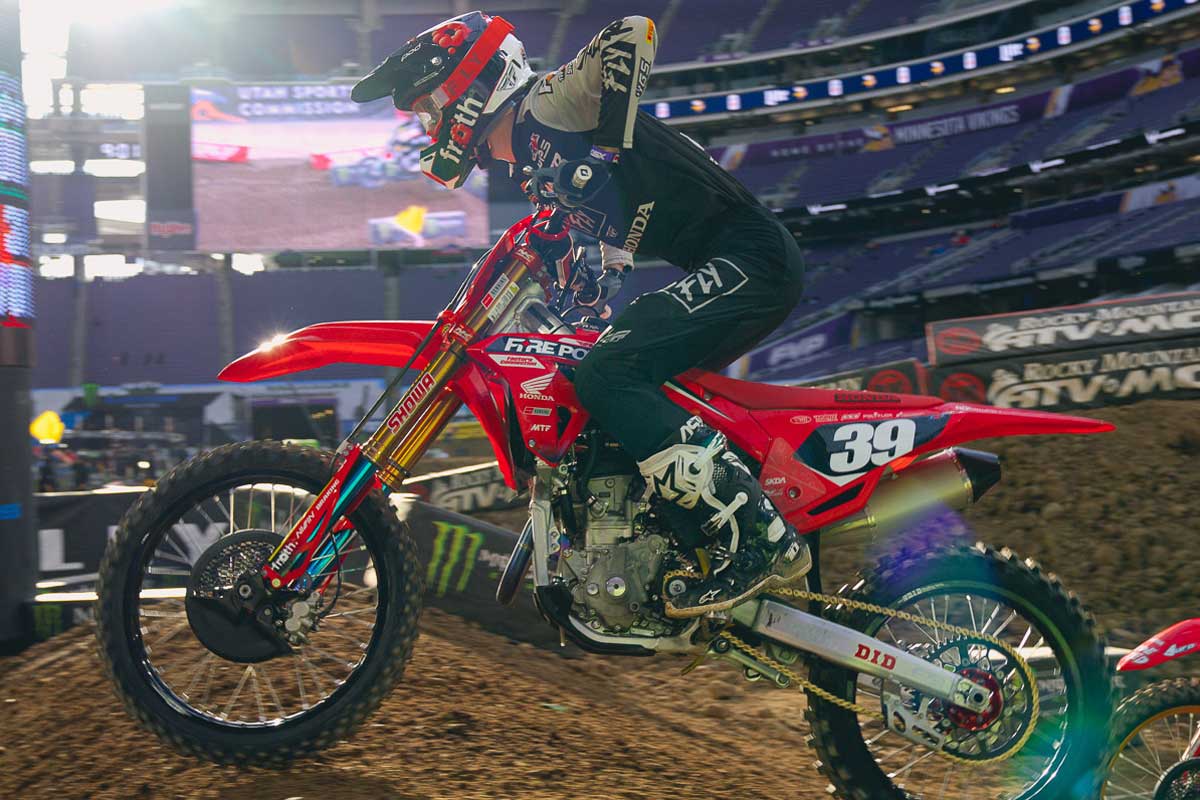 “Overall, the main was terrible, my start created these problems and I know what I need to work on this week. Though, there are a lot of positives, and we won’t dismiss them. It’s good to be back racing,” concluded Smith.
Jarret Frye made life difficult for himself having to qualify for the main event via the last chance qualifier.

“Its never fun trying to make the main from the LCQ as anything can happen. I am glad I won the LCQ and made it through but its not the way I want to do it,” said Frye.
Frye didn’t fare well in the main and the team and Jarrett will work hard this week to improve his position on the track.

“Things didn’t feel right in the main, we have some things to work on and we have a big week ahead this week as I need to ride like I do when we are out practicing,” concluded Frye.

Team Manager Martin Davalos was happy with the weekend but knows the team should be getting better results as pre-season testing, and training went well and both riders have shown a lot more speed than they displayed on the weekend.

“It was ok, not bad, not great. I know what both riders can do as I am with them every day. As a team it was a good weekend, everyone worked well together and we showed promise, but we need to build on this and improve our overall position,” said Davalos.

For more information go to www.firepowerhonda.com

The next race is this weekend – 26th of February in Arlington. For more information on this weekend’s races go to www.supercrosslive.com